トップ > スタッフブログ > VTuber lessons began with the start of online lessons. Online is a mass of possibilities!

It’s been almost a year since we started our online lessons.

These are the types of people who want online lessons.

・People who are afraid of coronavirus and can’t attend

・People who want to do theater

・People who live far away

The Scenario Club has made it through the online lessons.

The end of Corona is still a long way off, and I think that online lessons will become the standard way to combine with real classes, like telework.

I’ve always wondered if there was anything interesting I could do with online lessons, since I have a team of top-notch stage actors teaching theater.

I’ve been wondering what kind of fun things we can do online. 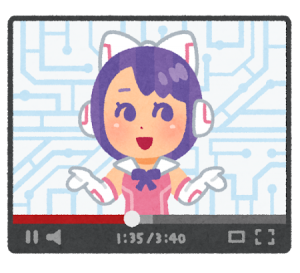 What is a VTuber anyway?

A simple explanation of YouTubers is that they are all video distributors who fight on YouTube as their main battlefield. Specifically, Hikakin, Hajime Shacho, and Fishers.

They don’t just do product reviews, they also do a lot of other things, and recently they’ve been getting into social issues.

Recently, the talk between Governor Koike and Hikakin is a hot topic.

Nowadays, YouTubers are the number one occupation people want to have in 2019, and it is safe to say that they are the second media alternative to television.

This is a virtual Youtuber, or VTuber for short.

The following video is of Kizuna Ai, a leading VTuber.

She has even appeared on NHK.

By the way, the term “VTuber” was coined in 2016 according to Wikipedia, but it seems to have taken root after 2017.

Since the end of 2017, the term “VTuber” has been a generic term for 2DCG and 3DCG characters (avatars) active on the Internet and in the media, as well as distributors who post videos and broadcast live using these characters.

Recently, more and more people are becoming VTubers on their own.

VTuber tools have become more affordable, and more and more individuals are starting to do this without the need for large equipment.

Why did I decide to start VTuber lessons?

The biggest difference between YouTubers and VTubers is that “VTubers can become anything they want depending on their avatar.”

For example, it would be hard for Mr. Hikakin to play a cute and beautiful girl in the flesh, but as a VTuber, he can easily do so.

VTubers can be anything they want to be. 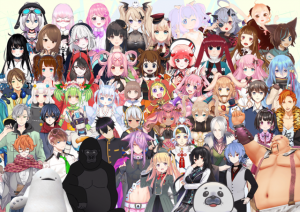 VTubers are a diverse group of people. In addition to beautiful girls and handsome men, they can be grandmothers, robots, or animals.

When I heard the words “you can be anything,” I thought of what actors say: “The world of theater is free. If you play a character, you can be any kind of person.”

The people in VTubers are not necessarily voice actors or actors.

I thought to myself, “If VTubers learned how to act, wouldn’t they be able to expand their range of expression?”

This was the beginning of this lesson.

However, there were many challenges in starting the VTuber lessons.

・How to proceed with the lessons?

・What are the challenges of VTubers?

We have some knowledge, but we can’t even test how to do it.

So, we were just warming up the concept.

That’s when we happened to meet two VTubers!

The one I’d like to introduce to you this time is Emo Ishiki.

I asked her for advice and we started the test lesson!

Many challenges to start?

However, before we could start, we had to share information with the actors and staff.

To begin with, I was the only one who knew about VTubers.

・What is a VTuber?

・What are the requirements of VTubers?

・What kind of lessons should be given to improve the situation?

What kind of lessons would be good for them？

１.What to do with the script？

2.How to develop the character？

The second part is especially important, because if I don’t match up what each VTuber is looking for with the actors as much as possible, the goal will become vague.

I will act as an interpreter between the actors and the VTubers, and we will coordinate our opinions.

This starting point is probably the most important part.

For the first lesson, I was there to see how things went.

Then, once the form was in place, we continued with more and more lessons.

And then to a form.

After the first lesson, we had a lot of exchanges with the actors, and the VTuber class was taking shape to some extent.

Emo-san made a video of the VTuber class.

I didn’t expect her to make such a wonderful video, and the whole staff was thrilled….

The VTuber class may not be that major yet.

However, I felt that the “acting” skills that actors have cultivated over the decades are definitely useful to VTubers and are highly compatible with their skills.

At first glance, “theater” seems to be something far away from everyday life, like standing on a stage or acting in front of a camera.

In fact, it is a skill that is very familiar to us, as we can make ourselves look good in front of the people we like, or show a different side of ourselves in sales.

This time, we started a new type of online lesson focusing on VTubers.

Maybe you can solve some problems through theater.

So, why don’t you give Scenario Club’s online lessons a try!

Of course, VTuber lessons are welcome! And you are welcome to come to the school.